One hundred years ago the worldview was “installed” on “people” mainly through two main information channels:

If at that time you developed any “add-ons” to the prevailing worldview system, wanted to offer a fundamentally new system of worldviews or modify the emphasis in the existing, then you would have to negotiate this with the church or the state (represented by the monarch), who were the owners/censors of the main distribution channels. END_OF_DOCUMENT_TOKEN_TO_BE_REPLACED

Because Augmented Reality applications usually require physical movements (standing up – bending over – walking and so on), users very quickly stop using them REPEATEDLY if they do not receive either a good dose of endorphin or do not see the HIGHEST utility from the mobile phone application, the use of which requires increased calorie burning (let’s face it, this is a fairly rational behavior in biological terms). END_OF_DOCUMENT_TOKEN_TO_BE_REPLACED

In 2011, my team of designers with extensive experience in developing for mobile platforms started developing the first interfaces for augmented (AR) and virtual reality (VR) applications.

After a series of tests, we realized that the simple transfer of experience from 2D UI/ UX design into the field of 3D virtual reality and augmented reality does not work; at that time I wrote an article “Future belongs to Augmented Reality and 3D interfaces”.

Moreover, the utility and usability of interfaces in virtual reality and augmented reality are fundamentally different and even the experience of interface design for 3D games does not play a big role and should not be considered relevant.

END_OF_DOCUMENT_TOKEN_TO_BE_REPLACED

It seems that Virtual Reality is literally everywhere while Augmented Reality is receding.

But actually it is not true.

Of course, if we were planning to switch to a concept of life shown below,

the development of virtual reality technology would be a key priority.

END_OF_DOCUMENT_TOKEN_TO_BE_REPLACED

View in the headset: END_OF_DOCUMENT_TOKEN_TO_BE_REPLACED 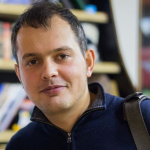